Start your preperations right now because Football Manager 2012 is set to launch just in time for Christmas. If I were you, I'd tell your friends you're going on a round the world trip for a few months in the new year, then look into costs of hiring a live-in maid who's prepared to cook you food, bring you drinks and give you relaxing shoulder massages. Anyone who's ever played Footy Manager will tell you that pretending to be a football management God is a time-consuming affair as you flutter away more hours than is healthy fine-tuning your tactics and scouring the transfer market for the deal of the century. It is, however, one of the most addictive and satisfying gaming experiences on the planet.

And, like crack dealers peddling their unique brand of sherbert, Sports Interactive Ltd. and SEGA Europe are going all out this year to deliver yet another addictive hit of football action with a host of new features and improvements to bolster the mind-boggling array of stats that already accompany the U.K.’s top management game.

In total, SEGA tells us there are a whopping 800 new features, which include new in-game reports for scouting, enhanced transfer and contract systems and in-depth team-talks - not to mention an overhaul of the existing game engine. Here it is in action…

There's an exhaustive list of new features this year. Take a deep breath and check these out...

Transfers & Contracts – significant changes to the transfer and contract systems, including loyalty bonuses, better implementation of amateur and youth contracts, an improved transfer centre and the ability to lock areas of the contract negotiation when you aren't prepared to budge. This helps you to manage your budgets and gives you flexibility in what you offer money hungry players, or agents, as incentives. 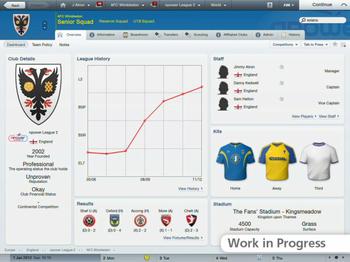 3D Match Improvements – new animations, a whole new crowd system, improved weather system, more stadiums, plus two brand new cameras - "Behind Goal" and "Director Cam" as well as all other camera angles being reversible - meaning you can watch and analyse every aspect of every game.

Manage Anywhere, Anytime – the ability to add or take away playable nations in your saved game as often as you want. Manage in that country at the start of the next season- meaning you don’t have to stay in the nations which are chosen by you to be playable at the start of your career.

Tone – a whole new level has been added to team talks and conversations, with the new tone system, which allows you to specify the way you want to say things – be as cool as a cucumber by saying things calmly or throw tea cups around by saying things with passion. There are 6 different tones to choose from with specific comments per tone. 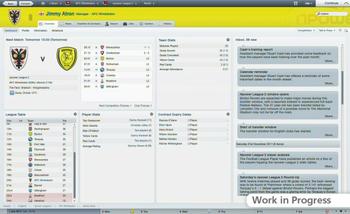 Brand New Tutorial – standing separate from the main game, a mode to help new players find their way around the game easily, whilst also offering tips to experienced managers on how to get the most out of the game, as well as a new in-game “how to” system.

Beyond these key improvements, there’s a lot of other new stuff you’ll notice too, including social networking options, a more in-depth youth system and more intense involvement by the media. Personally, we haven’t got enough hours in the day to play Footy Manager – between us we’ve already nearly lost wives, girlfriends and social skills because of it. But we will be reviewing the game later in the year, so if we ever do emerge back to work keep an eye out for it.

format
Going into my final year of uni this year… MUST NOT INSTALL.

the article
In total, SEGA tells us there are a whopping 800 new features, which include new in-game reports for scouting, enhanced transfer and contract systems and in-depth team-talks - not to mention an overhaul of the existing game engine. Here it is in action…

So defenders still can't defend, leading to masses of one-on-one chances of which only a handful will be converted. :(
Posted by sweey - Wed 17 Aug 2011 10:30
I have to be honest, I lost interest with the (for me) broken 2010 version. Patches failed to fix my “three players off injured in the first half of every single match despite everyone having 100% fitness to begin with” problem.

I tried 2011 for a while but the press conferences introduced a few years back continued to bug me and the formation/tactics system while interesting is almost too in-depth and fiddly. Quality players would become useless if you gave them a slightly ambiguous role or would completely fail in the ‘wrong’ formation as though they'd forgotten how to play football completely. I understand it to the point of it making sense but simply switching, for example, Barcelona's formation caused Xavi all kinds of fail.

To that end, I'm not really excited about 2012. I miss the older games…especially CM 97/98 which I spent hundreds of hours on.