What’s it about?
God of War III is the fifth and final chapter in the current story arc of Sony Computer Entertainment’s much lauded, bloody and brutal action adventure slasher series. In the role of ex-Spartan warrior, Kratos, you combine melee and magic-based combat to do battle against an array of beasties inspired by Greek mythology. There's also some puzzle solving to get stuck into before you face some epic boss battles on your body-slashing, neck-snapping quest to destroy Olympus for good.

Review
Rarely has a game totally captivated and immersed me in its world right from the outset, grabbing me by the throat, taking me on a journey of epic proportions and moving me emotionally with its monumental gameplay. God of War III is a stunningly produced game, and despite claims that it’s only used up about 50% of the power of the PS3, it’s technically and graphically the best game on the console, bar none.

Kratos is a powerful lead character who oozes masculinity, shown visually through his finely detailed muscular character model, but proven through his incessantly violent nature. When you play as Kratos it almost feels like his power is running through your veins -- that's almost an indescribable feeling to sum up, but it's one that the whole team at SCE Studios have somehow managed to achieve through the sheer epic nature of the game. 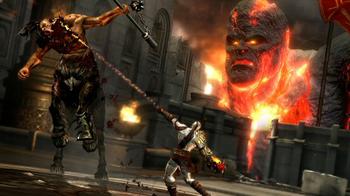 Kratos has an arsenal of gloriously vicious moves at his disposal as he slices and dices anything that stands in his path, ripping heads clean of necks, or using his metal boxing gloves to beat enemies into a bloody mess. The sheer variety of magic and melee-based weapons puts the creativity in your hands to cause utter carnage and violence on a unprecedented level. The cinematic move-set, triggered by Quick Time Events, adds an impressive layer to some of your button-mashing exploits and helps to showcase some magnificent set-pieces. This is a polished production. Despite the feeling of anarchy setting in on occasions, the combat feels measured, deliberate, well-paced, satisfying and extremely fluid. Put this type of gameplay against the back-drop of some epic environments, and throw in some larger-than-life mythological creatures, and you've got the complete package.

The range of weapons, from the Claws of Hades to the Nemesis Whip, from the Blade of Olympus to Apollo's Bow, affords you with the freedom to be utterly creative with your killing, and visually the impact is immense. Puzzles blend into the combat nicely, so much so that you’ll hardly notice some of them (particularly the environment-based ones) and as a result the frenetic pace doesn’t suffer. Indeed, God of War III will be over as quickly as you started it. Eight or so hours of gameplay seems like nothing when your totally engrossed in the game.

And the boss battles -- Oh, my God! They are just how a boss battles should be -- with brilliantly modelled, challenging enemies and plenty of intense moments. Through a combination of long battles that often switch locations, fiercely fought combat, and Quick Time Events, the sheer scale of the fight scenes are as epic as you'll have seen with incredible creatures and stunning environments complementing the extremely smooth fighting mechanics.

As far as innovation goes, God of War III does follow the same Bluprint as previous games, so no points there. It also throws in some poorly thought out save points and a few boring crate-pushing puzzles that don't do it any favours. But, little can distract you from the sheer scale of the battles, the high production values and some of the finest hack 'n slash gameplay that we're likely to see for some time. Tieing up the storyline rather nicely by showing you that Kratos isn't just an emotionless killing machine after all, God of War III is a fitting ending to one of the finest video game chapters in history. I'm just really glad that I got to experience it. 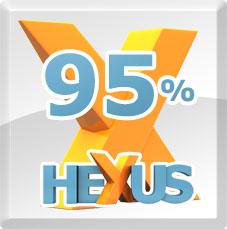