Gameplay impressions
F1 2009 offers everything you need to customise the experience to your liking and level of skill, including toggling driver assist on and off, tweaking the likes of wing angles and suspension, and choosing your preferred control method.

Personally, we’ve never liked using the Wii steering wheel. Not only does it require far too much concentration to master , but holding a cheap, plastic wheel in our hands in mid-air just doesn’t quite feel right for such a fast-paced racing game. Most of our Wii wheel experience was spent struggling to turn corners and spinning the car. So, opting for the Wii Remote control, and then eventually the classic controller configuration that we're used to using in non-motion-sensing racers,we found the control method that we were most comfortable with. So, credit should be given to Sumo Digital for providing so many control method options, all of which are fully customisable.

You can’t fault the game content-wise either. The career mode should appease fans of the sport as you get to race around all the tracks and pick and choose your favourite drivers, whereas the challenge mode offers a wealth of content to get through. The lack of online multiplayer is a glaring ommission, but two player split screen at least provides an offline multiplayer option for friends to test out each others skills to the limits and it has an excellent feature that analyses each player's driving style and then makes a suggestion as to which of the driver aids each you should turn on or off.

On the track, the cars handle extremely smoothly with the Wii Remote, Nunchuck and classic controller, whereas the Wii wheel takes a lot more getting used to but arguably provides a more sterner challenge. The tracks, cars and backgrounds are light on detail, but the feeling of speed has been captured well as you hurtle around bends at breakneck speeds. Competitior A.I. is fairly predictable as they'll follow the race lines rigidly and not react intelligently to your own skilful maneovres, so though it provides a slick, fast and arcade-like race experience, A.I. drivers lack the personality and the skills of some of the other critically-acclaimed racing games.

As an overall package, F1 2009 does generally lack a bit of personality, with bare bones presentation, simplstically-styled in-game menus and inadequate graphics that don't push the Wii hardware to its limits. The no thrills, no spills gameplay and presentation may cater for the more casual Wii audience, but seasoned racing fans may be dissapointed. 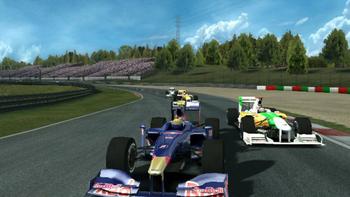 WIth frame-rates dropping when there are too many cars on screen, particularly around corners, F1 2009 isn't the best looking or best performing racing game that we've played on Wii by a long shot. But, if you're a fan of Formula One you'll probably get a kick out of the smooth, arcade-like handling of the cars, the feeling of speed around the tracks, and the chance to race as one of your heroes around some challenging tracks. It just could have been a lot better.

stavroshamster
It's not. It says at the top of the first page that they reviewed the Wii version. :)

no it is, they only played the one version in the review, but it is definitely trying to spread the love to both versions, for an easy example look at the title of this thread