AMD launched its highly anticipated FidelityFX Super Resolution (FSR) graphics technology a month ago. The HEXUS editor looked at the first implementations of this important performance enhancing tech on day one, but now the first big AAA game has been patched to work with FSR - Resident Evil Village from Capcom. 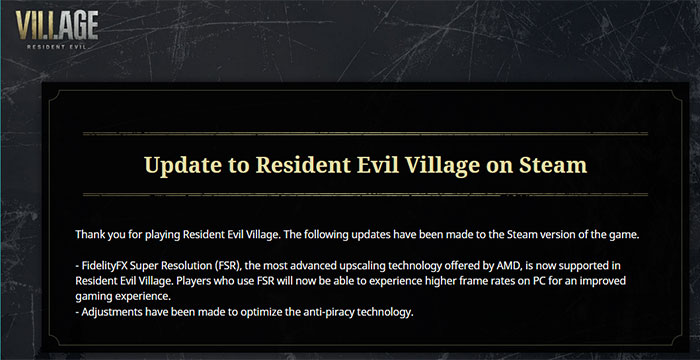 The official Capcom bulletin regarding the FSR update to the game is rather short, and you can see it in its entirety above. With regard to FSR, it simply says that AMD's new advanced upscaling tech is now supported for "higher frame rates on PC for an improved gaming experience". If you are a gamer enjoying this title but would enjoy a performance uplift at your chosen resolution, it might be worth dabbling in the new settings to see if you are happy with any of the FSR quality levels on offer vs native gameplay. 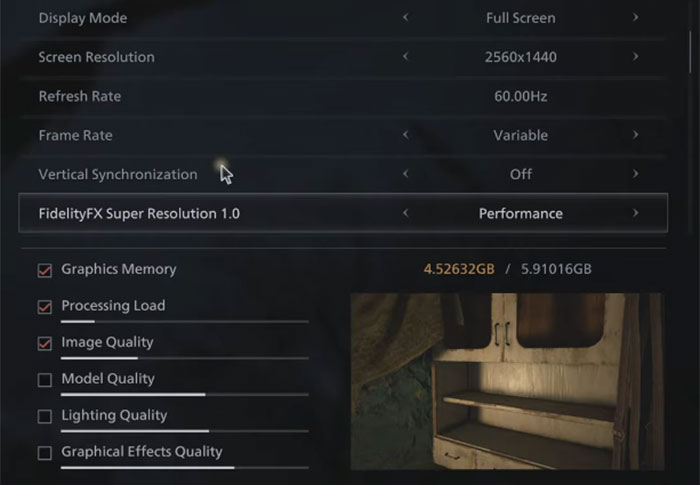 I don't have this game to have a gander at the impact of FSR, but there are already a number of YouTubers that have documented their experiences with the patch on multiple system configurations. Here is a high-end example (FSR vs Native at 4K on system with Ryzen 7 5800X CPU and RX 6900 XT GPU). 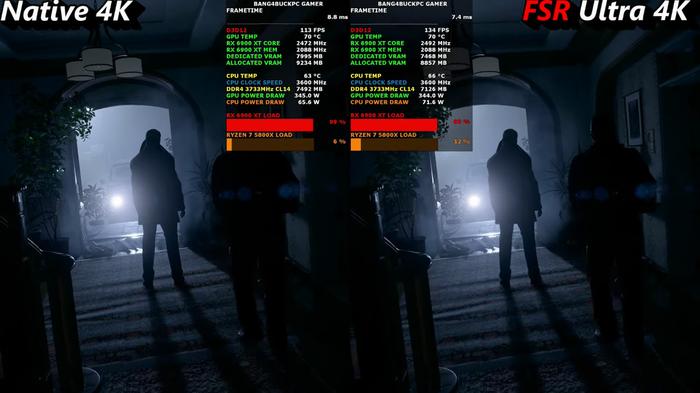 In addition to the above good news for Resident Evil Village players with graphics cards supporting FSR, there is something in the patch for all PC gamers – some optimisations to remove performance issues caused by Capcom's strident anti-piracy measures which employs both its own-brand DRM and Denuvo Anti-Tamper.

In case you are unaware, there have been complaints about Resident Evil Village performance since launch – particularly with regard to performance in various intensive combat sequences. A week ago, I watched a Modern Vintage Gamer video about the issues, in a video bluntly titled 'DRM has ruined Resident Evil Village on PC'. There is another scathing view from Digital Foundry, which confirmed the pirated version of the game ran faster / smoother, as some of the anti-piracy / DRM code had been bypassed by the Empress cracking group.

You can watch the above linked videos to see the performance benefits in the cracked version of the game vs the Steam version. I didn't find any updated cracked/vs patched Resident Evil Village performance comparisons at the time of writing.

Posted by lumireleon - Wed 21 Jul 2021 20:58
While at Nvidia…
We have to get your game source codes so that we can apply DLSS using a 20 megawatt supercomputer. Then… DLSS sdk ‘finally’ out for un-official applications. Spicy ways for locking blind guys into the ‘eco-system’ unfortunately RED has stopped the band.
Posted by fend_oblivion - Thu 22 Jul 2021 10:10
At least they fixed it. That's good.
Copyright © 1998 - 2022, HEXUS.net. All rights reserved. HEXUS® is a registered trademark of HEXUS.