Details of an upcoming Call of Duty: Modern Warfare 3 Hardened Edition have spilled onto the internet.

An anonymous source over at Wired has managed to get his/her hands on an image detailing the "Hardened Edition" contents, and the premium bundle appears to be crammed full of exclusive goodies - including a free one-year subscription to Call of Duty: Elite that grants access to future downloadable content.

According to the image - which appears to be genuine – the Hardened Edition will include all of the following:

We'll know if the leaked details are for real after the MW3 Hardened Edition makes its scheduled debut at the Call of Duty XP event this weekend in Los Angeles. In the meantime, check out the image below and keep an eye out for the game when it launches on November 8th, 2011. 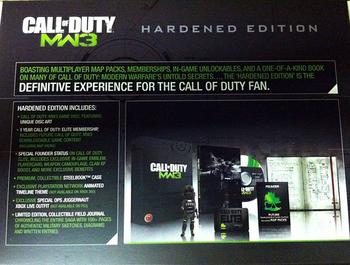 Posted by crossy - Thu 01 Sep 2011 13:49
I wonder what price tag they're going to attach for all those “goodies” - if they're suggesting an RRP of about £60 then I might be tempted, (although no way am I going to do what I did in the past and buy CoD on PC and console). On the other hand if it's £80+ then I think I'll just stick with the “floppy” edition. ;)
:stupid:
I guess that the access to DLC for a year will be the deal-maker for a lot of folks - certainly the rest looks like padding.
Posted by shaithis - Thu 01 Sep 2011 14:05
You know it's going to be so expensive they should have added a tube of lube!
Posted by OilSheikh - Thu 01 Sep 2011 17:44
Nowhere as good as the M2 one where you got a statue of Soap and night-vision goggles.

OilSheikh
Nowhere as good as the M2 one where you got a statue of Soap and night-vision goggles.

Btw, does this include 1 year of premium cheat-free gameplay service ?

Yeah that was the prestige edition! Hardened for MW2 came with a similar art book and a COD Classic download key.
Posted by Grey M@a - Thu 01 Sep 2011 19:07
The only thing that will make me decide if to go PC or 360 will be if Virgin Media can sort their ongoing issues with xbox live and most CoD games on their service. Will most likely go PC though as I can get the steam codes cheaper than the £40 price tag they ask for.