At the Android Dev Summit, Google has revealed Android 12L, an OS built with larger screens in mind. Furthermore, developers have been handed new APIs, tools, and guidance by Google, to make it easier to build for large screens.

While Google Android looks great on phones, and there is a special version of the OS for TVs/remotes, it must have been apparent that the inbetweener platforms like tablets and foldables are not very well optimised in OS/app terms. Hence, the need for something like Android 12L – one might think of it as a parallel to Apple's iPadOS (currently at v15, like iOS). 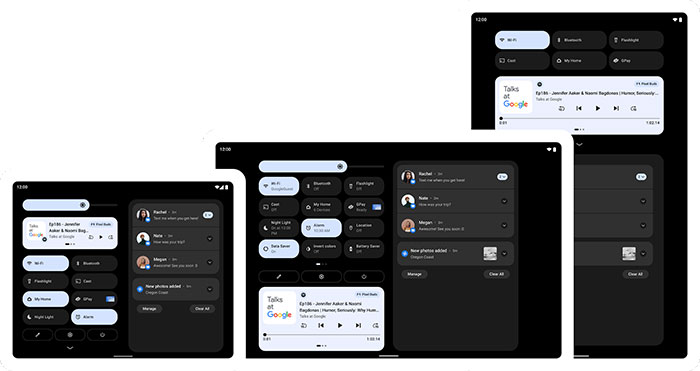 Google says "there are over a quarter billion large screen devices running Android across tablets, foldables, and ChromeOS devices," which is a lot of people having a suboptimal experience. It is nice therefore to see Google "continuing to invest in making Android an even better OS on these devices, for users and developers," and Android 12L is a significant step, one hopes.

It is easy to talk about this kind of change, but what is Google actually doing / proposing? To start with, in its initial developer preview, Google says it has "refined the UI on large screens across notifications, quick settings, lockscreen, overview, home screen, and more". One specific change you will see if you are using the fledgling 'L' suffixed OS is that on screens above 600dpi, the notification shade, lockscreen, and other system surfaces use a new two-column layout. System apps in 12L are also optimised in this way.

It isn't just larger static screens that Android has to play nicely with. The foldable mobile form factor seems to be in its ascendency with 265 per cent grown observed YoY, according to Google. One of the appealing features of Android 12L will be able to smartly meld its UI as you convert your foldable's form factor. I've recently seen people still complaining about (dumb) dual screen use on the likes of the Surface Duo 2, so these kinds of smart adjustments will be welcome from many Android partners and users. In 12L, split screen mode will be usable by all apps "regardless of whether the apps are resizeable," asserts Google. Another change that is easily noticeable with Android 12L is the presence of a taskbar, like with Windows, MacOS and ChromeOS. 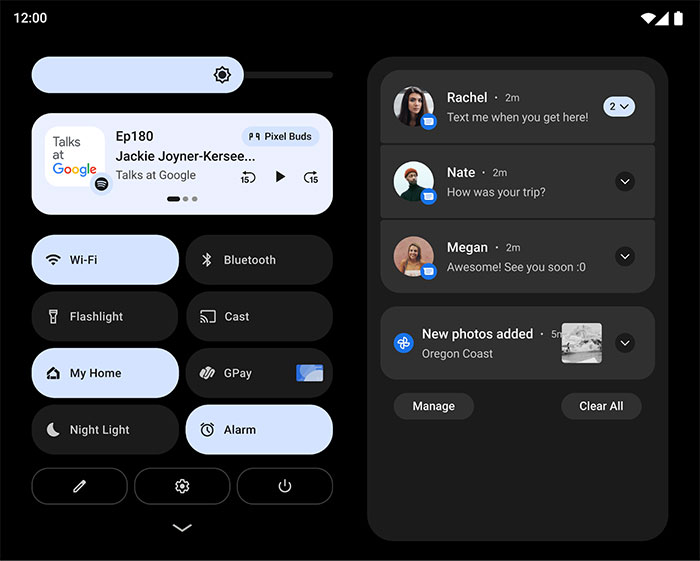 You might be thinking that Google must be up to something in the background – device-wise – to warrant this extra attention on tablets and foldables, and hopefully that is true, as first party devices by companies that develop OS software can shine a pleasing and clear light on how devices and OSes are supposed to play together in harmony.

Google says to expect a "wave of Android 12 tablets and foldables," in early 2022… Will we get to see the long-rumoured Pixel Foldable or a new tablet bearing the Google brand? Whatever the case, Google is already busy working with the likes of Samsung on Android 12L OS tuning and devices. It is also asking all developers to pick through the Android 12L and check their apps work with Adaptive UI patterns in the Material Design guidelines.

Android apps work in the Windows UI just like other apps, with alerts, clipboard, Snap Layouts.

Posted by gordon861 - Thu 28 Oct 2021 13:39
An updated Nexus tablet would be good, but it would probably have to be larger than 7 inches to set it apart from larger phones and they would have to keep the price down, neither of which I can really see them doing.
Posted by KultiVator - Thu 28 Oct 2021 15:35
Wondering whether this will eventually replace Dex mode on Samsung devices - pretty big overlap in functionality and aims.
Posted by Wirko - Fri 29 Oct 2021 11:16
Microsoft wasn't that smart in 2012, they released Windows 8 but completely forgot about Windows 8L, one that would be suitable for screens from 12“ to 120”.
Posted by Tabbykatze - Fri 29 Oct 2021 14:19

gordon861
An updated Nexus tablet would be good, but it would probably have to be larger than 7 inches to set it apart from larger phones and they would have to keep the price down, neither of which I can really see them doing.