Google often tweaks the way that its Chrome browser works to maintain the best experience for its many users. This year alone, HEXUS has reported upon a native dark mode, a password checkup extension, media keys support, and the developers turning on 'lazy loading' by default.

A significant part of the web economy is driven and/or supported by page advertising - and many tech sites, for example, wouldn't exist without ads. However, some sites can annoy with intrusive, irritating, or even resource heavy ad experiences, perhaps attracted by the opportunity to squeeze some extra pennies out of its visitors. Google has previously worked to block 'annoying ads', to fall in line with the Better Ads Standards. However, there is still work to be done, and evidence of development in this regard has come to light in a work-in-progress Chromium commit, via 9to5 Google.

The source report notes that Chrome's existing ad blocker might eliminate ads over an entire page but the new 'heavy ad' blocker just zaps the resource heavy ones. It defines anything over 0.1 per cent of bandwidth usage, 0.1 per cent of CPU usage per minute, and 0.1 per cent of overall CPU time as a 'heavy ad'.

With this work just beginning, it isn't clear when this 'heavy ad' blocker will be ready for prime time. However, Google must push forward with this kind of development to stay competitive to rivals such as Edge and Firefox - while balancing support for Better Ads Standards.

About a month ago HEXUS reported that Mozilla was working on a Firefox Premium subscription offering. This is due to land in October, with VPN and secure cloud storage built-in - to deliver some easy to recognise value.

Now Mozilla seems to have come up with another money spinning idea - an ad-free subscription service. On a first look web page it says that it has partnered with some of the biggest web publishers around and will "share your payment directly with the sites you read". Spinning this development as a win-win situation, Mozilla says that with the $4.99 monthly subscription these sites "make more money which means they can bring you great content without needing to distract you with ads just to keep the lights on". 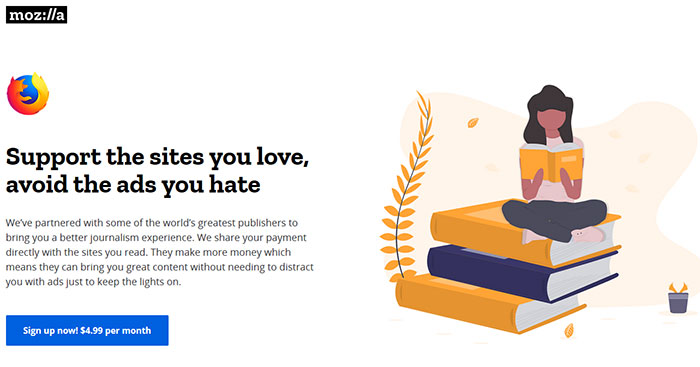 The above project is one of Mozilla's explorations of alternative funding models for the web.

Posted by Faiakes - Fri 05 Jul 2019 15:43
Or you can run pihole on your entire network for the one off cost of a raspberry pi.
Posted by Saracen999 - Fri 05 Jul 2019 17:48
What he said. ^^^^
Posted by ByteMyAscii - Fri 05 Jul 2019 18:34
They could not be resource hogs if they were static images, or did not autoplay without permission.
They need to fix the problem at the source, what types of content are able to be hosted as ads.
CPU utilisation is a useless measure when hardware can vary so significantly.
What makes something more impactful on a lower specced system would not be so on a higher specced one, but the impact of it should not be ignored in that case.
Posted by sinhaomar - Sat 06 Jul 2019 11:23
We'll see. As it will be)
Posted by peterb - Sat 06 Jul 2019 11:58

Faiakes
Or you can run pihole on your entire network for the one off cost of a raspberry pi.

Which is what I do.