Microsoft released Windows 10 Insider Preview Build 21337 (RS_PRERELEASE) to Windows Insiders in the Dev Channel yesterday. The update features quite a few attractive additions such as; the ability to reorder and customise virtual desktops, a File Explorer layout update, updates to caption settings, and Inbox apps additions and improvements – as well as a raft of other minor updates and bug fixes.

What I haven't mentioned so far is an exciting update for Windows gamers. Build 21337 includes a preview of Auto HDR, a technology Microsoft debuted on Xbox Series consoles which works not just on modern titles for these platforms but older SDR backwards compatible games from the original Xbox and Xbox 360 days.

Microsoft has a dedicated DirectX developer blog post on this Auto HDR feature introduction. Before going further it is important to note that Auto HDR won't work with just any old PC setup. In your Windows HD Colour Settings control panel you will be able to quickly see if you have capable hardware – and be able to toggle the 'Use HDR' setting. Basically it should work on any modern PC where your monitor is HDR certified. If you already have this setting applied then the Insider preview will automatically apple the Auto HDR PC gaming experience going forward. 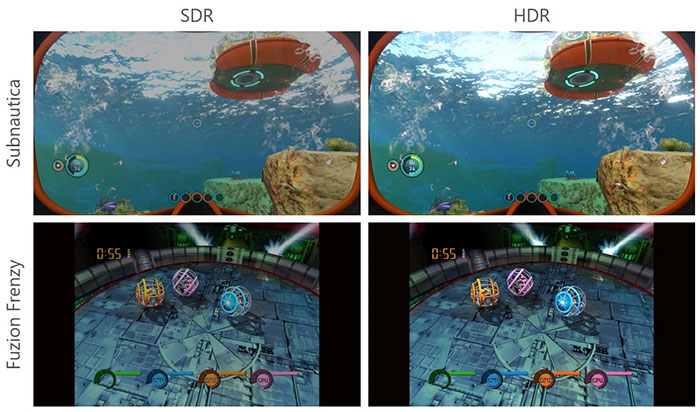 Interestingly Microsoft has also implemented a 'secret feature' which can "enable a split screen mode where the left side shows the original SDR content and the right side shows the Auto HDR upgraded content". It is recommended that tinkering with this is only for advanced users at this time and requires sue of the command prompt. However, Microsoft gives you step-by-step instructions to turn the option on and off.

Probably the most important thing about all this is – does Auto HDR improve my gaming visuals? Of course modern games designed for HDR will use the full range of colour and luminance available in a premeditated way. They will be designed and tested with HDR systems in mind. Auto HDR requires the use of 'intelligence' to expand the use of the available colour space etc.

The above example is provided by Microsoft to show how SDR, Auto HDR and Native HDR compare in the game Gears 5. You can see that Auto HDR makes a pretty good shot at how the designers wanted HDR to look. Microsoft explains that "HDR and Auto HDR are not just about boosting brightness but really about emphasizing the details in a scene leveraging the increased range: darkening shadows and illuminating highlights."

Last October Digital Foundry took a close look at what Auto HDR brought to Xbox gamers. You can watch that analysis here (YouTube) but remember that though you will hear the differences explained you won't really be able to see the differences unless you have already got an HDR capable system to watch on.

And Resident Evil 4 VR has been announced for the Oculus Quest 2.

5 Outriders is the biggest Steam launch success for Square Enix

Posted by Otherhand - Thu 18 Mar 2021 13:37
“Darkening shadows”? Have I completely misunderstood HDR? I thought it was supposed to produce a greater range of hues within shadows
Posted by Nifl - Thu 18 Mar 2021 15:19
Increasing the dynamic range without remastering the content is extremely difficult and impossible to do without causing unwanted artifacts.
I think this will be a gimmick at best.

Adding HDR to games has been a thing for a while with SpecialK. But sadly it has the huge problem that the entire content is remapped. That includes text and HUD elements… which is terrible in some instances.
Maybe M$ will make it a bit “smarter”.
Posted by kalniel - Thu 18 Mar 2021 15:59

Otherhand
“Darkening shadows”? Have I completely misunderstood HDR? I thought it was supposed to produce a greater range of hues within shadows

That's more bit depth. HDR is about your total range of luminosities (brightness) - if SDR is 0.1 to 300 nits say, then HDR could be 0.001 to 1000 nits, so you want to stretch out your range of luminosities to go further into the extremes - so making blacks darker, and highlights brighter for eg. Naturally with more spread out luminosities the jumps between levels are greater, so to counter that you may want to use a higher bit depth so that you can describe all those hues in shadows for eg. with smaller steps.
Posted by MaddogPepper - Thu 18 Mar 2021 16:26

Nifl
Increasing the dynamic range without remastering the content is extremely difficult and impossible to do without causing unwanted artifacts.
I think this will be a gimmick at best.

Adding HDR to games has been a thing for a while with SpecialK. But sadly it has the huge problem that the entire content is remapped. That includes text and HUD elements… which is terrible in some instances.
Maybe M$ will make it a bit “smarter”.

Having used this on quite a few games now on my Series X (Samsung Q80R TV) I can honestly say its not a gimmick, makes a huge difference to old content. For example Control never had HDR implemented natively but with AutoHDR it looks really good, same with Prey from Arkane Studios. I agree it is not as good as a native HDR implementation, but it does work much better than you might expect.
Posted by Spud1 - Thu 18 Mar 2021 17:59
OK, I am going to be *that guy* here.

This sounds interesting an all, but I would really appreciate it if they could fix HDR mode in windows first of all, so I don't have to toggle it on and off at an OS level before launching a game. When I first read the title here I hoped they were basically announcing that fix (i.e. automatically toggling HDR on and off depending on the content on screen….like my phone, Xbox or TV does). It's horribly broken right now in windows.

Still, i'll be keen to give this a try and will run the update later….curious!